Tree-based classifiers are commonly used in practice. Their pros and cons are as follows.

Decision tree is the basic building block of all tree-based classifiers. The later three classifiers average over many trees for better result. In machine learning jargon, they are ensemble methods that build strong learner out of weak learners.

In practice, you probably don’t want to use decision tree due to its instability. Both random forest and boosted trees can provide good result almost out-of-box without feature engineering. I have seen some case studies in books saying that boosted trees may be slightly better than random forest.

For simplicity, I will use binary classification problem as example and binary decision tree as building block in this post. The class labels are black and white, or \(Y\in\{0, 1\}\) and the features are two real valued variables \((x_1, x_2)\). One set of training data is shown in Figure 1.

Figure 1. Black and white dots to be classified. Try the update button.

Personally, I find the tree-based classifiers less natural to think of than the more ‘geometric’ methods such as logistic regression or support vector machine. They deviate from my comfortable zone of linear algebra + calculus, and contain some degree of messiness and magic which I will comment on later.

The decision tree classifier uses a series of decisions to determine the class label. In the case of binary decision trees, one raises yes/no questions, as shown in Figure 2. It is similar to the game Botticelli.

The root node and internal nodes of the tree are the decisions to be made, whereas the terminal nodes (leaves) are the class labels.

Figure 2. This decision tree generates the decision boundaries in Figure 1.

Geometrically, these yes/no questions partition the feature space into rectangles (boxes) for data with different labels. Try the update button in Figure 1 to see one possible partition.

At the training stage, one needs to figure out the decision boundaries (the splitting values for the yes/no questions). This process is known as branching. For the test data, one simply follows the branches to get the class labels.

As you can see, the high-level idea of decision tree classifier is quite straightforward. However, it immediately gets ugly when you start to implement the details.

To branch out on the training data set, there are two questions:

Intuitively, the goal is to make the resultant partitions as pure as possible after each split. Practically, there are infinitely many ways to do the partitions and it is even hard to define what ‘optimal’ partition means. As a result, many (naive) empirical strategies exist. For example, one can split the data on one feature at a time. And for the chosen feature, one can

It is also common to do feature selection and splitting value selection together using greedy method, i.e., check all features one by one and pick the best feature with its best splitting point.

To be fancier, you may want to define ‘optimality’ as the least number of splits, or maybe you want to parametrize the decision boundary using more than one feature (e.g., a tilted decision boundary in Figure 1). Such attempts immediately make branching a lot harder. And the effort is probably not justified: in the end, one only cares about the classification performance on the unseen test data, which is unlikely to correlate with these artificial ‘optimality’ measures.

In general, there are more details one needs to worry about. For example

Unfortunately, there is no clean answer to them. For the first question, two branches as well as \(\sqrt{N_\text{features}}\) branches are commonly used. For the second question, some limits need to be applied to the tree growth since a fully grown tree classifies the training data perfectly and is almost for sure an overfit. Possible limits include

In summary, I see the branching process as a mess. In practice, you need to try and error to fine tune the tree parameters.

To evaluate the quality of a splitting, we need to quantify the purity of the data before and after it.

One natural measure of purity (for physicists) is entropy:

For our two-class example, there is only one degree of freedom since \(p_0+p_1=1\). We can simplify the notation using the binary entropy function

where \(p\) is the percentage of white dots. The shape of the binary entropy function is shown in Figure 3. It takes on small values if any of the two species dominates and takes the maximum value 1 when the two species are of equal number. In other words, it is an impurity measure.

In fact, any function that assumes a similar shape with the entropy function could be used as purity measure. The default one used in sklearn is Gini index (not to be confused with Gini coefficient)

It is preferred over entropy due to the ease of computation. I will stick to entropy in this post though.

The decision boundary separates the data into two groups, let’s call them a and b. Then the entropy after splitting is given by

In practice, one only needs to compute the entropy after splitting and pick the splitting condition that minimizes \(EH\).

why averaging over trees is a good idea

The biggest problem with decision tree is its instability. For any particular test data point, the predicted class label is likely to change as a result of

In some sense, the decision tree model is similar to k-nearest neighbor (KNN) model: the former uses straight lines parallel to the feature variable axis to partition the feature space whereas the latter uses Voronoi diagram to do the partition. When k is small, the KNN model overfits and the change in the training data significantly changes the model.

Since it is hard to find one perfect decision tree, one obvious solution is to average over many trees. This is actually the rationale for all the ensemble methods. To see why (and when) it works, let’s consider an artificial case where all \(n\) base classifiers (weak learner) have the same error \(\epsilon\) and we combine their results via majority voting. The voting classifier has error

In other words, it is wrong only when more than half of the base classifiers are wrong. The numerical value of \(\epsilon_{VC}\) for 11 and 51 base classifier is shown in Figure 3. 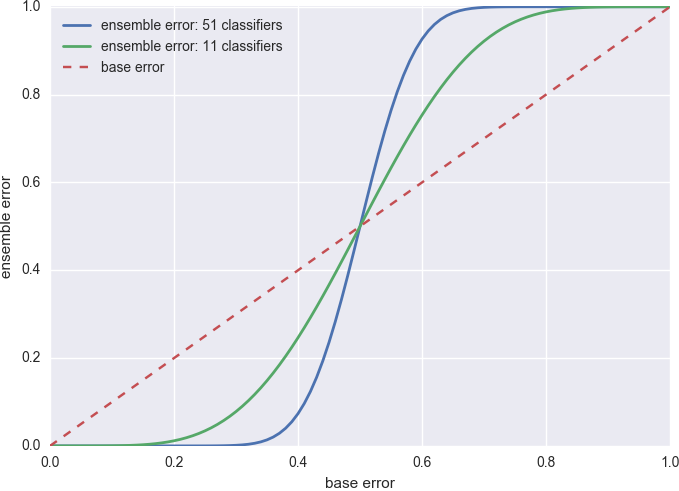 Figure 3. Error of the voting classifier.

As you can see, as long as each base classifier does better than random guess (\(\epsilon=0.5\)), the voting classifier further reduces the error. And when that happens, the more base classifiers the better.

There is one underlying assumption in this error reduction though:

Otherwise there is no point averaging them. The fancier classifiers such as bagging, boosting, and random forest, use different ways to construct uncorrelated trees.

Bagging is short for bootstrap aggregating. As the name indicates, you first bootstrap then average over the results.

For example, if our dataset is two balls in an urn, one black one red, then the bootstrap sample could be (black, black), (black, red) or (red, red). Thus if we compare the bootstrap dataset to the original dataset, some data points would be excluded and some would have several copies. If we run an unstable classifier on the bootstrap dataset, we are almost guaranteed to get a somewhat different model: more uncorrelated to the original one if the classifier is more unstable.

First, let’s look at some fictitious plots. Let’s assume that we have three base classifiers trained with different bootstrap datasets, each of which has 80% accuracy and we average over them (majority vote). Note here I am imagining the data come from a generative model and the 80% accuracy is with respect to the generative model (or you can think of training + test data).

If the classifier is stable, the three base classifiers may agree on most data, let’s say 70% of them. In this case majority vote actually hurts! We actually end up with worse accuracy for the voting classifier, see Figure 4 for an example.

Figure 4. Voting classifier gets 70% accuracy even though the 3 base classifiers all have 80% accuracy.

On the other hand, if the classifier is unstable, the base classifiers trained on bootstrap datasets may agree on only small portion of the data, see Figure 5 for an example. This is exactly when majority vote works: the voting committee has to be both informed (better than random guess accuracy) and diverse (uncorrelated from each other).

Figure 5. Voting classifier gets 100% accuracy even though the 3 base classifiers all have 80% accuracy.

One example is shown in Figure 6 where the data points follow Gaussian distributions. The two Gaussians center at (1, 1) and (3, 1) and share the same standard deviation 0.5. Ideally the decision boundary should be at \(x_1=2\). The code can be found here.

As you can see, one black dot is mingled to the white dot region and it strongly affects the decision tree result. On the other hand, the bootstrap samples may not contain this ‘outlier’ and thus provide less deviated decision boundaries. In this case, the bagged trees classifier has higher accuracy than the decision tree classifier for the test data. 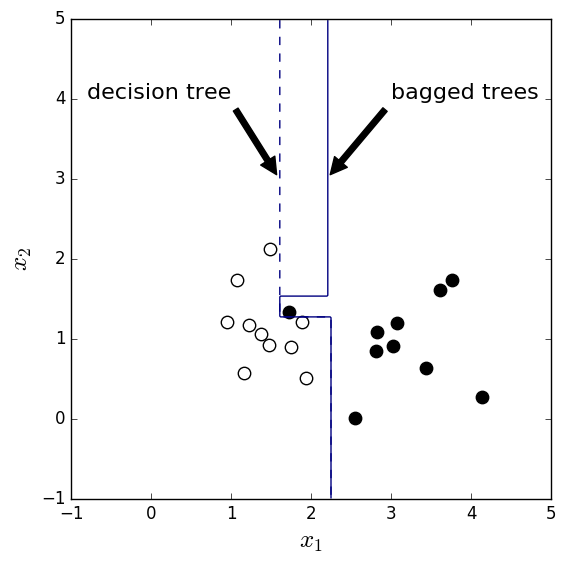 From this example we can conclude that if the unstable classifier is messed up by some small number of outliers, bagging should help.

Two ideas are used in the random forest classifier:

The second idea makes the individual trees less correlated to each other. Intuitively, it should help. As for why it works well in mathematical terms, I don’t have any explanation.

As you have seen in Figure 4 and 5, the voting classifier works better when the base ones do not agree with each other on the same regions. The technique of boosting explicitly construct base classifiers to perform well on different data points.

Two weights are introduced during the iterative process

There is a magic relationship between the two weights, which can be found in books and talks. I don’t understand how it works but it seems there are some theoretical understanding about why boosted trees work.

As you can see, my understanding on random forest and boosted trees is quite poor. I am not sure what the mathematical tool is to analyze their errors since the branching of decision tree is somewhat ad hoc. Two of my data scientist friends (one math PhD, one physics PhD) recommended me a book to learn machine learning in general and it indeed has quite some discussions on tree-based methods.

Unfortunately, I find this book hard to follow, maybe due to my lack of math education. If you know any good learning material on tree-based methods, especially on the error analysis, please let me know.