This is the fifth and last milestone where we make further enhancements such as repo groups and bash shell auto completion. I will also talk about marketing an open source project.

The other posts in this series are

Often times a project consists of several repos and it’s important to keep them on the same branch and timeline. It is then helpful to define a repo group, which syntactically behaves like a repo but semantically delegates to the group members. For example, instead of calling

where the group my-group consists of the three repos.

Another useful call is

which checks out the branch 20-3-release for all repos in my-group.

If you have followed the previous milestones, you will find its implementation straightforward.

If you use Linux terminal, you probably hit the tab key often to automatically complete file paths, commands, environment variables, etc. You may also notice that tab completion doesn’t work for all commands. (Indeed it doesn’t work for our work-in-progress gita clone yet). In this commit we will make it happen. Specifically, we will auto complete for

For example, if we type gita and hit tab, all the sub-commands will be displayed, something like this

If we type gita p and hit tab, we will see all the sub-commands that start with p, something like this

If we type gita pus and then hit tab, push will be completed since it is already the only match.

As an example for the second auto-completion feature, if we type gita pull then hit tab, all registered repos will show up.

To make it work, we need to define the auto completion behaviors in a bash script, say .gita-completion.bash. Inside it, we will have a line

Here complete is the magic word that registers the function _gita_completions for auto-completing the gita command. I won’t show details of this _gita_completions here. Hopefully you can figure it out using the pointers below.

You may want to read GNU doc: Programmable Completion Builtins for more options for complete. Besides -F for function, the other common ones are

Typically you will source .gita-completion.bash in the .bashrc so that every new terminal register the auto-completion behaviors for gita.

To get the lists of the sub-commands and repos, my current strategies are

The other building blocks for the _gita_completions function are

The following two blog articles give a good summary for bash auto completion.

If you never write shell script before, try this book

I am by no means an expert in marketing, and this section is more of my story on promoting the gita project. Please let me know if you have any suggestions for better results.

The main features of gita were finished in early 2018 (see original blog post here), which roughly amount to milestone 3. After one year’s passing, it got 5 stars on GitHub: 3 from my coworkers, 1 from myself, and one from a stranger (I wonder how he found the project).

One day it suddenly occurred to me that I should post it on hacker news. And this is what happened

I also took a screenshot of the GitHub analytics on the second day. 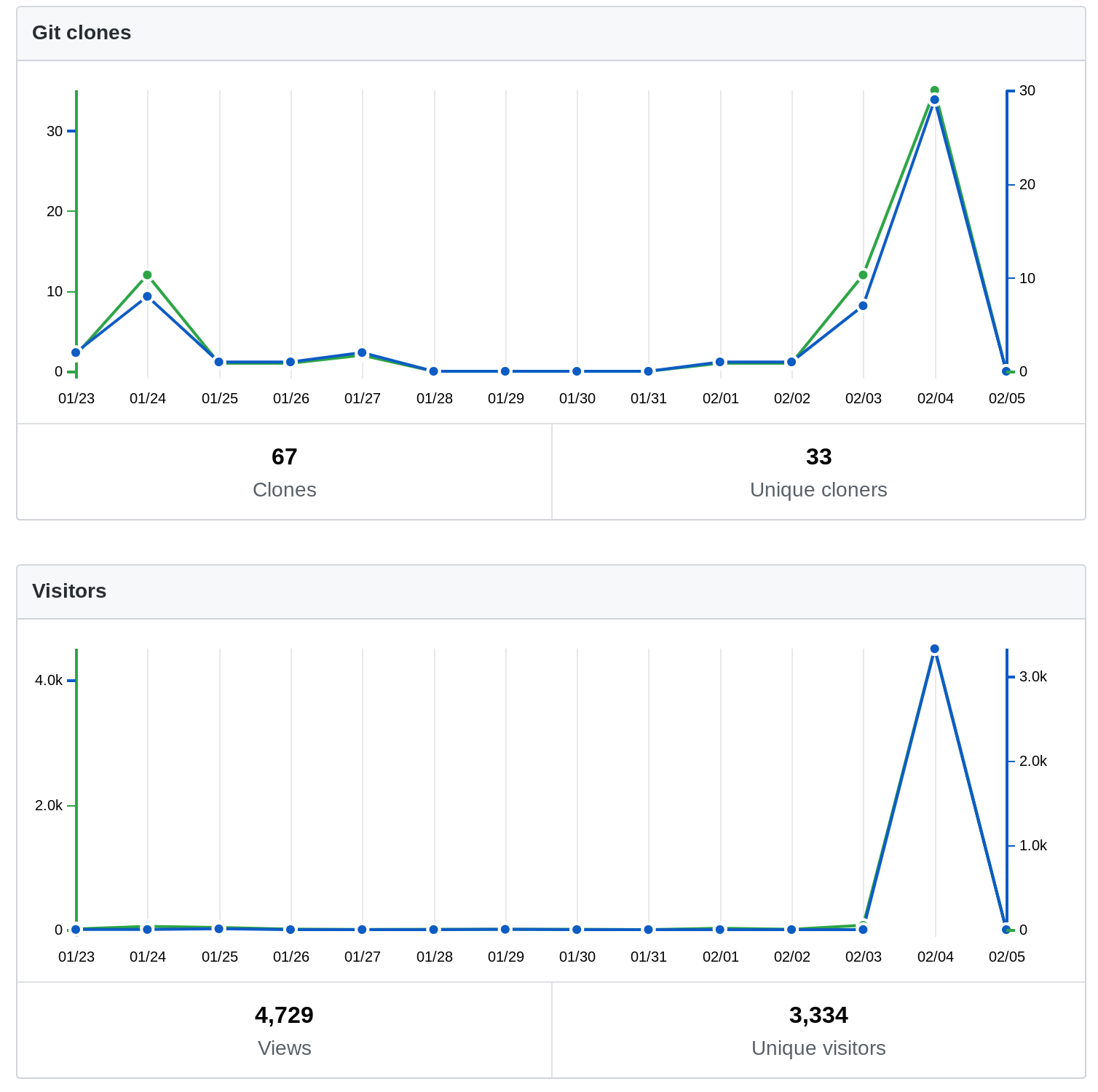 It tells me that other people find it useful too, and I should keep increasing its exposure on other platforms. Here is an incomplete list of them, roughly ranked by the effectiveness in bringing in traffic.

Besides them, I also got traffic from other people’s recommendations such as Ruan Yifeng’s blog.

That’s basically all I did for marketing, probably too preliminary. If you are completely clueless like me, maybe the following articles will be useful.

One annoying thing is that GitHub only saves analytics data for two weeks. You may be interested in repo-analytics written by Tim Qian.

So this is the end. I hope you have learned something from these posts. I also hope you will start to create something on GitHub soon. Remember to

And finally, make sure to promote it!