This is a note I wrote while doing a project on transcranial magnetic stimulation coil design. TMS is an FDA approved treatment for depression.

Transcranial magnetic stimulation (TMS) is a non-invasive method to stimulate the nervous system. A current change in the stimulator circuit positioned near the brain cortex induces change in magnetic field in space and the latter then induces a change in the electric field in brain tissue. As a result, axonal membrane potential is changed and the functional areas of the brain cortex is stimulated. The induced field typically reaches no more than a few centimeters into the brain, i.e., it is a `shallow’ brain stimulation technique.

In a conventional (biphasic) TMS design, a capacitor is first charged to several \(kV\), and then discharged through the gating of a thyristor in a RCL oscillator circuit, generating a current of several \(kA\) in the coil in about \(100\mu s\), with a profile of a damped cosine shape. The peak magnetic field achieved near the coil can reach as big as \(4T\) and the induced magnetic field typically lasts for \(300\mu s\). A new generation of controllable TMS (cTMS) provides near-rectangular pulse shape, adjustable pulse width, number of phases and directionality parameters.

The induced electric field is known to be more effective in stimulating axons and dendrites if its direction is parallel to the neuronal structures. Most studies have been performed on the primary motor cortex (M1) where a focal muscle twitch can be produced, known as the motor-evoked potential (MEP).

TMS equipment that delivers stimuli with a repetition rate lower than \(1Hz\) are called single-pulse devices. They are mostly used in basic research studies where good temporal resolution is essential. Devices to deliver repetitive TMS pulses (\(1-50Hz\)) are also available, known as rTMS. It can produce lasting effects outside the stimulation period, sometimes known as `momentary lesions’ in the cerebral cortex. In general, trains of stimuli applied at low frequency (\(0.2-1Hz\)) inhibit neural activity while the ones applied at high frequency (\(5-20Hz\)) increase neural activity. Besides its role in studying brain physiology, TMS is also used clinically with applications in detecting demyelination, detecting stroke, improving motor function of patients with Parkinson’s disease, dystonia, stroke,
and reducing depression.

Besides the known adverse effect of TMS such as seizure induction and mild headache, the disadvantages of TMS include:

The circuit of a biphasic TMS design is basically a RCL circuit with two nonlinear components: the thyristor S and diode D to avoid reverse charging.

Due to the large currents running through the wire and the resulting repulsive coil Lorentz force, the mechanical integrity of the coil needs to be carefully considered.

For simplicity, we model brain tissue as linear, isotropic and homogeneous medium with electric conductivity \(\sigma\), electric permittivity \(\varepsilon\), and magnetic permeability \(\mu=\mu_0=4\pi\times10^{-7}Hm^{-1}\). The linearity assumption allows one to use the linear constitutive relation and Ohm’s law,

The isotropy assumption allows the scalar description of \(\varepsilon\), \(\mu\) and \(\sigma\) as in general they can be tensors under the linearity constraint. The homogeneity assumption further simplifies \(\varepsilon\), \(\mu_0\) and \(\sigma\) as three scalar numbers to describe the whole brain. Here we have assumed that the magnetic permeability of the brain is approximately equal to the vacuum value \(\mu_0\).

The frequency dependence of \(\sigma\) and \(\varepsilon\) of the brain (including both WM and GM) is shown in Fig. 1.

There are two dimensionless parameters that are of vital importance in characterizing the electro-magnetic (EM) response of a biological tissue \cite{Plonsey1967}: \(|k|R_{\max}\) and \(\omega\varepsilon/\sigma\), where \(R_{\max}\) is the maximal dimension of the sample, \(\omega\) and \(k\) are the angular frequency and the complex wave number of the induced EM wave.

The first parameter characterizes the wave propagation effect as \(|k|R_{\max}\) is the phase variation of the EM wave in the range of the sample. For reasons that would be clear later, the first and second parameters also controls the size of the inductive and capacitive properties of the sample respectively \cite{Plonsey1967}.

Assuming \(R_{\max}=1m\), we plot the two characteristic parameters of brain tissue in Fig. 2. Note in this wide frequency range, \(\omega\varepsilon/\sigma\) is small compare to \(1\). 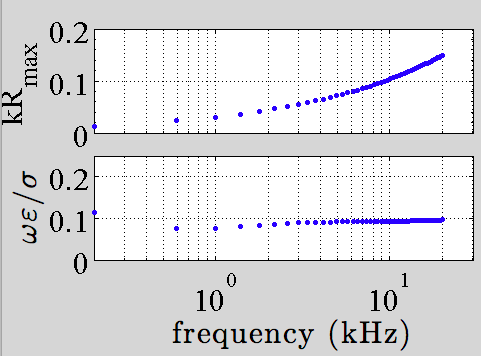 To get the equations for the induced electric field, we take the curl of the Maxwell-Faraday equation, plug in the previous Eq.s and use the fact that no free charge exists inside the homogeneous conductor, i.e., \(\nabla\cdot \mathbf E=0\). The end result is a damped wave equation

In general, the computation of the induced electric field inside a conductor is complicated since the wave propagation, the capacitive effect and the inductive effect are all present. The quasi-static approximation simplifies the calculation dramatically and it applies when the two characteristic parameters are small, i.e.,

In this approximation, the wave propagation effects, the capacitance effects and the inductive effects in the biological tissue can all be neglected. In other words, the tissue behaves as a standard conductor with instantaneous response \cite{Jackson1998}.

For brain tissue, the quasi-static approximation holds up to \(MHz\) , if the region of interest (\(R_{\max}\)) is of the order \(10cm\), as seen in Fig. 2. Also, the skin depth is easily beyond the \(10cm\) range. Note that a large skin depth does not guarantee the feasibility of deep brain stimulation as it is only a relative intensity measure.

Note this Eq. enjoys two features that greatly facilitate analytical calculation. Firstly, \(\mathbf E\) has instantaneous temporal response with respect to \(\partial_t\mathbf j\). Thus we can drop the temporal dependence in the calculation, i.e., the inductive effect can be neglected. Secondly, the Cartesian components of \(\mathbf E\) along different axes decouple thus can be calculated separately.

This Eq. can be written in the differential form \begin{align} \nabla^2\mathbf E_{\mathbf A} = \mu_0 \partial_t\mathbf j. \end{align} Since only regions outside the wires are of interest,
\(\mathbf E_{\mathbf A}\) satisfies Laplace’s Equation. Suppose the wires are in the upper half space, then we are only interested in the field in the lower half space \(z<0\). The problem can then be formulated as a boundary value problem

where \(\mathbf E_0\) is the boundary condition. Thus \(\mathbf E_{\mathbf A}\) can be solved either as an integration, or as a solution to Laplace’s equation.

From now on, we assume the currents in all wires have the same time derivative, i.e., \begin{align} \dot j_0 (t) = -\partial_t j(\mathbf r , t) . \end{align} In other words, the spacial dependence of \(\dot j_0(t)\) is eliminated. This quantity can be viewed as a pseudo-charge density.

electric field due to induced charge on the tissue boundary

When the brain tissue is placed inside the primary field \(\mathbf E_{\mathbf A}\), surface charges are induced at the brain boundary as a result of the conductance difference of the brain tissue and its surroundings and they give rise to secondary field \(\mathbf E_\varphi\). Under the quasi-static approximation, this charge accumulation can be considered as instantaneous, i.e., the capacitive (charging) effect can be neglected.

Under the quasi-static assumption, the electrical field due to surface charges can be written as \begin{align} E_\varphi = -\nabla\varphi = \frac{\nabla}{4\pi\sigma}\int \frac{\Sigma(\mathbf r’,t)} {|\mathbf r-\mathbf r’|} dS’, \label{eq:E_phi} \end{align} where \(\Sigma\) is the surface charge density at the brain tissue boundary.